How To Get Rid of Grubs In Your Lawn

Insect life is a normal and natural part of every lawn. Grubs are the larvae of several different species of beetles. During mid-summer, beetles will flock to your grass to lay their eggs. They lay their eggs a few inches into the soil, and each beetle with lay up to 60 eggs. A few weeks later, in late summer, the grubs will hatch into hungry larvae. 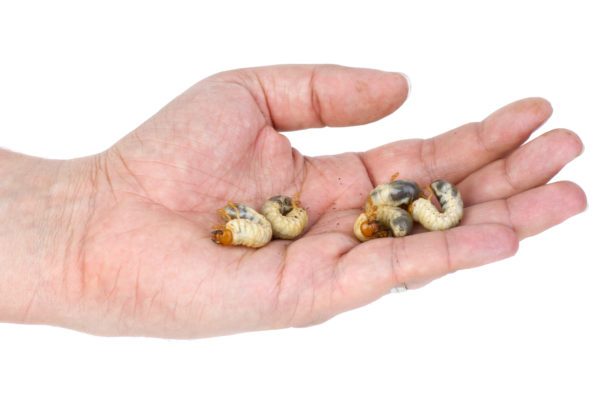 A small beetle population is not a problem. However, in large numbers, grubs can wreak havoc on your yard. If you find yourself facing a grub infestation in your yard, read on to learn how to treat the problem without further damaging your grass.

What’s the problem with grubs?

As mentioned previously, small numbers of grubs are merely a consequence of having a yard. Beetles will inevitably make their home in your grass and larvae will flourish there. Grubs consume grass roots for food, which is what causes direct damage to the yard.

As the grubs move through the soil looking for food sources, they will continue to consume roots and kill your grass. A few grubs eating a few roots is not harmful, but a large grub population will do considerable damage.

How do I identify grubs in the yard?

Because you can’t physically see the grubs in the soil, you must look for signs of grubs on the surface of your yard in order to identify a grub problem. When grubs eat grass roots, the grass on top goes brown in patches. You can track these patches around your yard as the grubs move and continue eating. If these patches don’t resolve with additional watering, they’re likely caused by a grub population.

Grubs often attract other animals to your yard. If you begin noticing animals that weren’t present during previous seasons, you might have a large population of grubs. Raccoons, skunks, and birds all eat grubs as a food source. Moles also feed on grubs and can cause lawn damage of their own. If you notice digging or tunneling in your yard, that means that other animals are looking for grubs.

A grub problem can be directly proportional to the health of your lawn. A healthy, fast-growing lawn can usually outpace even large grub consumption rates. If you begin to notice these symptoms in your lawn, it may mean your yard has other problems, too, like soil compaction, nutrient deficiencies, or heavy thatch.

To confirm the presence of grubs in your lawn, dig up one square foot of turf and examine the underlying soil. You’ll be able to spot milky-white grubs roaming through the dirt. Fewer than five or so grubs per square foot of sod is not a problem, but a larger amount signals an infestation.

I found grubs, how do I get rid of them?

How you solve your grub problem will depend on how many grubs and dry patches you have. If you only find a few grubs under the dry patches of grass, you may be able to remove them by hand and monitor the situation. After removing the grubs, apply fertilizer and water the area thoroughly. Then wait to see if the issue resolves.

A larger population of grubs may require more aggressive tactics. Below, we’ll go over both natural and chemical solutions for large grub populations.

Natural Methods to Get Rid of Grubs

There are a few different types of natural grub solutions that will work well in an organic, chemical-free lawn. A tactic called integrated pest management is a natural way of controlling insect infestations in lawns and gardens.

Many gardeners use these tactics because they don’t negatively impact grass health and growth. Traditional pesticides will kill off the initial grub population, but they often don’t prevent the issue from returning the following season.

Integrated pest management introduces natural predators and beneficial bacteria and fungi to address an insect infestation. A few types of predators, bacteria, and fungi are particularly helpful for grub infestations as we’ve outlined below:

Milky spore is a bacteria that feeds on certain species of beetle grubs. Once you introduce this into your soil, it continuously populates the environment and feeds on beetle grubs for up to fifteen years. However, it may take a whole season for milky spore to build up enough to have a visible effect. This solution is slow to begin working, but it will continue to address your grub problem for many years to come.

It’s best to apply milky spore when the soil is hotter than 65 degrees Fahrenheit. This is the minimum temperature for grub activity. Apply milky spore before a rainstorm, or water the grass after spreading it to help it soak into the soil.

Do not use milky spore after applying a pesticide. The bacteria must have a food source – i.e., the grubs themselves – in order to begin working, so it can’t take effect if all the grubs have already died.

Nematodes are small worms that predate upon beetle grubs. They infiltrate the body of grubs to use them as hosts and subsequently kill them. Like milky spore, nematode treatments require watering – in this case, water before and after nematode application.

They also may require a season to surmount a large, effective population. Once they are established, however, they will continue to mitigate grub populations for several seasons.

As stated above, pesticides will rapidly kill off a population of grubs, but they likely won’t stop the problem from recurring again the year after. Toxic pesticides can also kill off beneficial insect populations, and they can harm children, pets, and any other living things that come into contact with your lawn.

You can use pesticides to mitigate a very large grub infestation if this is your preferred solution. However, keep in mind that pesticide use also keeps preventative treatments – like introducing milky spore or nematodes – from taking effect.

Also be sure to check out our article on the best grub killers here.

Get Rid of Grubs for Good

Though grub populations can be an unsightly annoyance, there are several different ways to reduce their numbers while still looking out for your yard’s health. Make sure to monitor your grass for brown spots and look into lasting, natural solutions for grub infestations!

The best way to get rid of grubs is to use natural methods that will help keep grubs away for good rather than using pesticides and having a recurring problem year after year.